Menashe Levin was a contemporary and close friend of Avraham Shlonsky and Nathan Alterman. His work contributed to Hebrew literature, among other things, a unique surrealistic dimension combining reality with imagination and delusion. Through this dimension, Levin excelled in portraying the integration that occurred in Israel between different cultures and lifestyles, between East and West, and between past and future. This portrayal was at its peak in the novel One Hundred Nights in Old Jaffa (1938).
An earlier work by Levin, Blue Sands, is considered the first Tel-Avivian novel. It has a historical significance as a ‘Roman à clef’: many of its protagonists can be identified, and it reflects the harsh reality that prevailed in 1920s Israel, affecting the art world as well as society, economy and individual life.
Levin’s distinctive style is also evident in his writing for theatre. His play Samson and Delilah – A Modern-Day Tragedy transcends the connection between time and space and between cause and effect, and portrays life as a carousel in which love and loyalty quickly transform into lies and betrayal. Levin was ahead of his time, making a valuable contribution to Hebrew culture with this post-modern play, devoid of the ideological pathos that was common in contemporary works. Its precise and witty dialogues remain relevant to this day.
Levin’s extraordinary talent and the free spirit that characterises his work are also manifest in his few poems, many of which remained unpublished until after his death. His silence as a poet may be attributed to the fact that the universal nature of his poetry was not in line with the ideological focus on the Land of Israel, which was considered a sacred principle by the artistic group to which he belonged (this group was called ‘Turim’, which was also the name of its periodical).
Along with all these works, Menashe Levin enriched the Hebrew bookshelf with a large number of translations, representing some of the best works of world literature. He laid the foundation for Hebrew translation by applying linguistic structures, speech styles and rhythms that wonderfully reflected the original works. He translated The Family Circle by Maurois; For Whom the Bell Tolls by Hemingway; Man’s Hope by Malraux; A Leaf in the Storm by Lin Yutang; Rameau’s Nephew by Diderot; Night Flight by Saint-Exupéry; The Thibaults by du Gard; L’Assommoir by Zola, The Golden Harvest by Amado, and many more. The great variety of Menashe Levin’s literary work ensures its eternal existence. One will inevitably read one of his translations, discover one of his original works or moving poems, or perhaps one day, see one of his plays in theatre.

All his texts have been scanned and available to read in several formats.
His texts are in Hebrew (the menu on the right shows all his books – poetry, prose and plays). 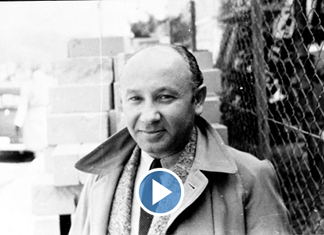